Due to thermal expansion, earthquakes, the own weight, hydraulic pressure loads and more impacts, the station piping is exposed to forces that need to be accounted for in order to avoid a pipe burst or disruption at a tank or pump nozzle connection. To optimize the station piping design with respect to material cost but taking into account its yield limits, a thorough station piping stress analysis has to be performed complying with the required standards and directives. The results are provided to the client as a Bill of Quantity.

To pump a fluid through a pipeline system over several tens or hundreds of kilometres, the fluid has to be pressurized resulting in a pressure drop that yields into a flow speed enabling the fluid to be transported from the start to the target position. Since the buried pipeline and the station piping including equipment is exposed to such operating conditions, which for transient phenomena can even have a more severe impact, a proper and extensive system and station piping hydraulic investigation have to be performed complying with the corresponding norms to guarantee for a smooth and stable operation. These hydraulic investigations also allow to minimize the material costs similarly to stress analysis. In this study several operational cases need to be considered to accomplish a proper functional design of the control system which is crucial for the whole plant design. PIPELAB will support you with tailor-made services to achieve the best solution complying with all restraints.

After the engineering and erection phase during Line-fill, start-up and a comprehensive testing phase, PIPELAB provides on-site support. With deep project insights and the process engineering knowhow, PIPELAB employees can provide expertized assistance to achieve a smooth and efficient Commissioning of the whole plant.

The increasing worldwide debates to mitigate global warming leads to an increasing demand of renewable energy sources for industrial power supplies to reduce the CO2 content in the atmosphere. Additionally, global warming leads to an increasing scarcity of fresh water. Therefore, the worldwide demand on alternative water supply systems is also increasing. A possible solution to both problems are desalination plants based on solar energy. Centralized desalination plants further increase the demand on water transportation systems which distribute the desalinated water to the final consumers.

The schematic below shows concentrated sun rays as heat source for vaporizing water to steam to feed a power plant for the electricity production with turbines and generators. This technology called Concentrated Solar Power (CSP) is still considered as novel since the industrial application of this technology is not wide-spread yet. As conventional CSP aims to vaporize water to steam to feed a steam turbine with low efficiency (solar to electric ~30%), the approaches developed in the recent years increase the sun ray concentration (~1000 suns) to run a combined cycle (driving steam AND gas turbine) power plant with a solar to electric efficiency of about 65%. Since water is evaporated, this technology is also applicable on desalination plants like conventional Multi-Effect Distillation (MED) plants. The disolved salt in the sea water is separated from the pure water by evaporation. As for thermal CSP plants, a hybrid solution which incorporates the power generation and desalination process can be applied, called MED-CSP plants. 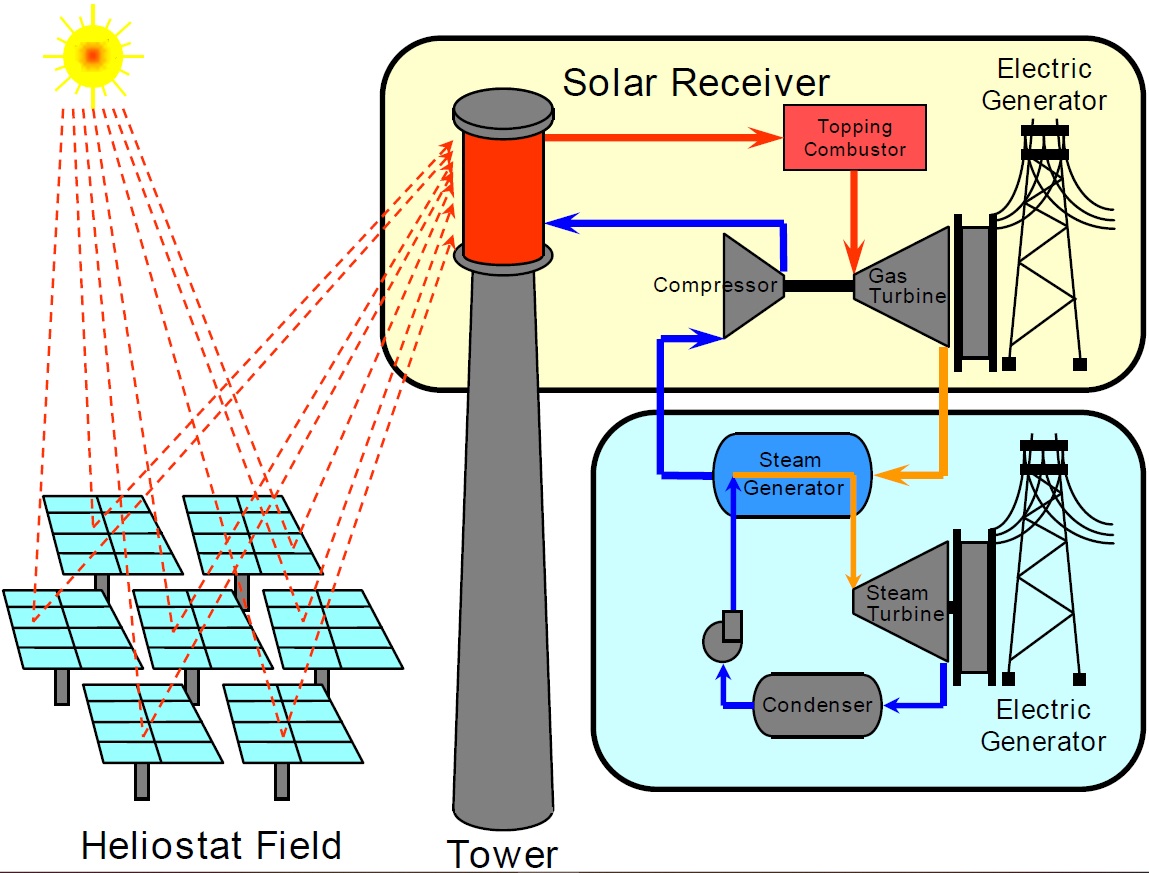 PIPELAB engineers are capable to use an elaborated and validated Monte-Carlo ray tracing software that allows to simulate the sun concentration for any kind of heliostat mirror geometry. The below 3D model including some simulated sun rays (illustrated in yellow) with a) the sun rays at noon and b) with the sun rays during the evening on a representative summer day for a representative dry location on the Northern hemisphere with 64 heliostats is shown. The black lines show the sun rays that are blocked by the neighboring heliostats and which, therefore, do not reach the target (i.e. the Solar Receiver located on the top of the Tower). By conducting a proper Monte-Carlo ray tracing investigation the optical efficiency can be determined. As the optimum design of such a solar tower facility depends on several factors, a tailor made solution by an expert is required.